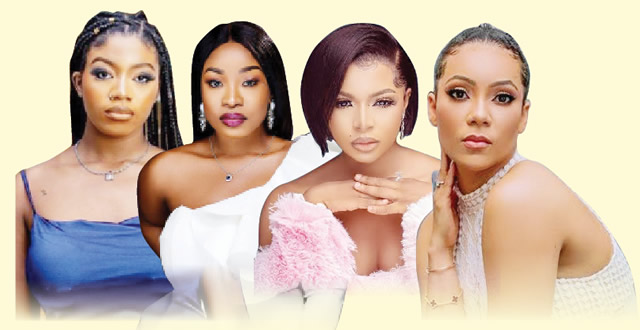 Before, what one needed to stand out in the Big Brother Naija reality TV show was a blend of traits such as intelligence, interpersonal skills and talent. Now, those traits alone cannot make a housemate win the hearts of fans. That is why many housemates, especially female, flaunt their sexuality. Sunday Scoop takes a look at some of female housemates in the current Shine Ya Eyes edition of the show using sex appeal to win the hearts of fans

Angel Smith is undoubtedly one of the most talked about female housemates in the ongoing reality TV show. She immediately got the attention of fans on the first day she stepped into the house, when she wore a cleavage-baring outfit, which elicited various reactions on social media.

While some body shamed her, others hailed her for flaunting her ‘assets.’ Many also believe Angel intentionally wears sexy outfits in order to constantly be the subject of conversation on the lips of fans. Viewers of the show will not forget in a hurry the lacy see-through mini dress she wore without underwear during the fashion show held in the house.

Before BBNaija, Liquorose had already made a name for herself in the entertainment industry as a dancer. She is a member of the Girls Gone Bold dance group.

Aside from being a gifted dancer, Liquorose has also used her looks to draw attention to herself. Many viewers of the show still vividly recall the shiny racy dress she wore during the fashion show. The current Head of House, Pere, could be seen stretching his neck to catch a glimpse of her while she was cat walking. Liquorose’s sexual appeal usually comes to the fore during the Saturday night parties where she dances seductively with some of the male housemates.

After Jackie B was introduced to viewers of BBNaija on the second launch day of the show, fans took to their respective social media handles, using various adjectives to express how they felt about her sexy figure.

The curvy single mum, who is an interior designer and a certified event and wedding planner, is never below the radar when it comes to flaunting her sex appeal in the house.

The 29-year-old loves to dress in clothes that accentuate her sex appeal. She also recently revealed that she is attracted to Michael, one of the housemates who joined the show after the second week.

Many will surely have different perceptions of Maria but they will all agree that she is one of the most beautiful housemates in the competition.

Most times in the house, the 29-year-old former air hostess turned realtor, dresses in cleavage-baring outfits. The light-skinned contestant also holds the attention of the male housemates with her sensual dance steps at the Saturday Night parties.