This is coming after many BBNaija fans expressed shock at how Yousef was saved from the eviction while Niyi, Yerins and Beatrice got evicted from the house.

Many had made a mockery of Yousef upon his entry into the Big Brother house, as he was likened to a Bollywood actor while predicting he would be the first to be evicted.

In her reaction to Sunday night eviction, Nkechi Blessing took to social media to slam those who had earlier predicted Yousef as the first housemate to be evicted.

In her post on Instagram, Nkechi questioned if they are God while likening Yousef to a rejected stone who was saved from eviction. 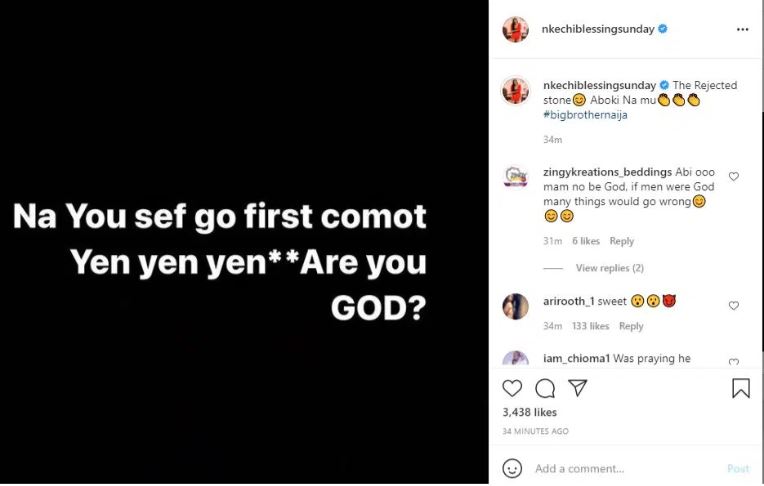 Some fans who were shocked about how things played out on Sunday night wrote:

@WaamO “You all are surprised that Yousef is saved? Remember this season’s voting pattern, no one does full subscription like the Arewa people. Trust them to give him all the votes.”

@OlisaOsega “Arewa youths want the government to ban BBNaija but they voted massively for Yousef.”

@DrFrankObi “I’m still Shocked YOUSEF survived. I thought he could have been the first I never saw YERINS Eviction coming too soon. Truly Biggie plus the Viewers really shocked us all tonight.”

@Powerplay “Omo if Arewa people are behind Yousef, he’ll go far in this game.”

@mmesoma_i “I can’t believe Yousef will still be in the house and Yerins left.”

@olori_nini “Na ojoro joor, why BBN no show us the voting results of Yousef.”

@thewavegoddess “I voted yousef. At least my vote no waste.”