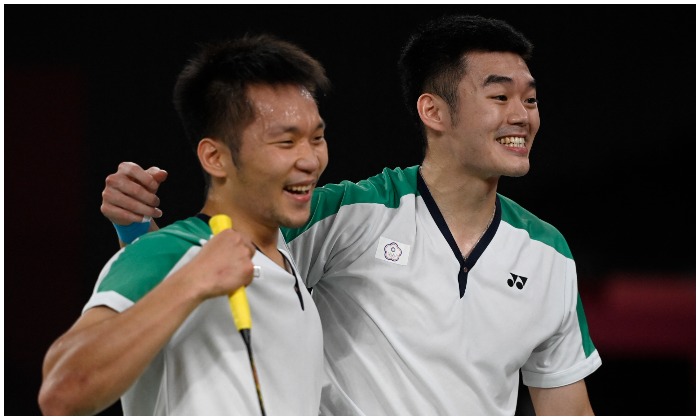 The pair only got together as a team in 2019, but their history stretches back much farther.

“We’ve known each other since junior high school and it was because we were familiar with each other and had the same objectives that we first teamed up,” said Lee.

“We’re very lucky that we were able to stand on the top of the podium at our first Olympics. I’d like to thank my partner for not abandoning me.”

Lee and Wang’s campaign in Tokyo got off to the worst possible start, losing their first match, before narrowly scraping out of the group stage.

But they went from strength to strength once they reached the knock-out round, eliminating the world’s number one and two teams on their way to the final.

“After losing our first match we were near collapse, to be honest,” said Wang.

“We even thought we might be going home, and all we wanted to do was keep going until the last minute.”

China won the mixed doubles on Friday and had hopes of pulling off a golden badminton sweep in the Japanese capital.

But Li and Liu fell short against their Taiwanese opponents, who sealed the deal in just 34 minutes.

“It’s been a difficult journey and we’ve put in a lot of effort,” said Liu.

“Winning the silver medal has left us with some regrets, but we won’t stop in our efforts.”

Taiwan can win another gold in the women’s singles final on Sunday when world number one Tai Tzu-ying faces China’s Chen Yufei.

“I think I did pretty well today,” said Tai, who beat India’s P.V. Sindhu in the semi-final. “I didn’t make many mistakes so I didn’t feel so much pressure.”

– ‘I’m still a kid’ –
In men’s singles, Denmark’s world number two Viktor Axelsen cruised into the semi-finals, but compatriot Anders Antonsen was unable to join him.

But Antonsen stumbled in his quarter-final against Indonesia’s Anthony Sinisuka Ginting.

Axelsen was all business against Shi, completing the match in just 41 minutes.

“Making it look quite comfortable and the feeling you have on court are two different things,” said Axelsen, tournament favourite after world number one Kento Momota suffered a shock early exit.

Cordon edged a step closer to winning Guatemala’s second-ever Olympic medal with his win over Heo, who knocked out Momota in the group stage.

“I’m still a kid, playing like a kid, having fun, trying to do my best,” said Cordon.