If FG could pick up Kanu, Igboho, why is it difficult to fight bandits – SOKAPU 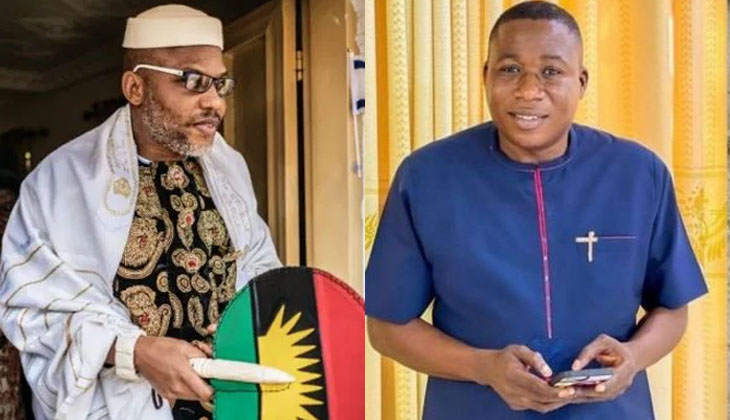 The Southern Kaduna Peoples Union has carpeted the Federal Government over the arrest and detention of activists across the country.

The umbrella body of the Southern Kaduna people urged the government to deploy the same tactics adopted in the arrest of the leader of the Indigenous People of Biafra, Nnamdi Kanu, and Yoruba Nation activist, Sunday Adeyemo, aka Sunday Igboho, in tackling the rampaging bandits in the North.

The SOKAPU leader also alleged that over 100 natives had so far been killed in communities in the Zango-Kataf Local Government Area of the state recently.

According to him, the government must stop the use of force on mere agitators, while pampering terrorists in the North.

Asake, a former House of Representatives member, said, “Again, this year, with the commencement of another rainy season, the onslaughts have resumed, which coincide with the period when our farming communities need to be on their farms.

“With particular reference are the recent attacks on communities in Zangon Kataf LGA, where no fewer than 100 persons have been massacred within seven days, 12 villages completely decimated and over 90 per cent of Atyap land deserted by inhabitants over fears of frightening uncertainties.

“It is sadly unbelievable that 10 days after these massacres and displacement in our communities from all observable indices, there appears to be a conspiracy of silence or a deliberate attempt by the government to downplay the severity of the atrocities and genocides being perpetrated by these attackers across our communities.”

On attacks and kidnapping in the North, Asake added, “We are convinced beyond doubt that the government has a capacity to combat these daredevil bandits, who have made life unbearable for our communities.

“If the government could lure the Benue militant, Terwase Akwaza, aka Gana, out of his hideout in September 2020, and later killed him; if they could trace Mazi Nnamdi Kanu to Kenya and blindfold him to Nigeria in June 2021; if they could trace Sunday Igboho to Cotonou and arrest him just a few days ago; and if they could smoke out the commander of the Eastern Security Network, Ikonso, and later kill him in April 2021, then, it clearly shows that the government has enough capacity to deal with the situation.

“We find it strange to explain how the government is unwilling to tackle banditry and kidnappings in the North, but at the same time hasty in deploying full intelligence and military force against southern and Middle Belt activists, who are engaged in one form of agitation, criminality or otherwise.

“Even when these bandits brought down an air force jet last Sunday, July 19, at the border between Zamafa and Kaduna states, thereby challenging the sovereignty of our country, the government has not shown enough action to tackle the dangers posed by bandits and insurgents, who have now acquired anti-aircraft launchers and sophisticated weapons.

“The survival, unity and progress of the Nigerian state are more threatened by the untamed atrocities of these northern bandit groups and armed Fulani herdsmen more than the actions of the Kanus, Igbohos and Terwases of the southern and Middle Belt regions.