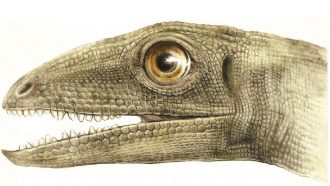 3-D: Short for three-dimensional. This term is an adjective for something that has features that can be described in three dimensions — height, width and length.

amber: Fossilized tree resin (not sap). Researchers think most of this gemstone likely comes from conifers, or evergreen trees that bear cones.

ancestor: A predecessor. It could be a family forebearer, such as a parent, grandparent or great-great-great grandparent. Or it could be a species, genus, family or other order of organisms from which some later one evolved. For instance, ancient dinosaurs are the ancestors of today’s birds. (antonym: descendant)

bacteria: (singular: bacterium) Single-celled organisms. These dwell nearly everywhere on Earth, from the bottom of the sea to inside other living organisms (such as plants and animals). Bacteria are one of the three domains of life on Earth.

beetle: An order of insects known as Coleoptera, containing at least 350,000 different species. Adults tend to have hard and/or horn-like “forewings” which covers the wings used for flight.

biology: The study of living things. The scientists who study them are known as biologists.

carnivore: An animal that either exclusively or primarily eats other animals.

colleague: Someone who works with another; a co-worker or team member.

coprolite: Fossilized feces. The word coprolite, in Greek, means “dung stones.” Coprolites are very important because they can provide direct evidence of what ancient creatures ate.

dinosaur: A term that means terrible lizard. These reptiles emerged around 243 million years ago. All descended from egg-laying reptiles known as archosaurs. Their descendants eventually split into two lines. Many large dinosaurs died out around 66 million years ago. But some saurischians lived on. They are now the birds we see today (and who have now evolved that so-called “bird-hipped” pelvis).

dung: The feces of animals, also known as manure.

evolutionary biologist: Someone who studies the adaptive processes that have led to the diversity of life on Earth. These scientists can study many different subjects, including the microbiology and genetics of living organisms, how species change to adapt, and the fossil record (to assess how various ancient species are related to each other and to modern-day relatives).

exoskeleton: A hard, protective outer body covering of many animals that lack a true skeleton, such as an insect, crustacean or mollusk. The exoskeletons of insects and crustaceans are largely made of chitin.

extinct: An adjective that describes a species for which there are no living members.

family: A taxonomic group consisting of at least one genus of organisms.

feces: A body’s solid waste, made up of undigested food, bacteria and water. The feces of larger animals are sometimes also called dung.

fossil: Any preserved remains or traces of ancient life. There are many different types of fossils: The bones and other body parts of dinosaurs are called “body fossils.” Things like footprints are called “trace fossils.” Even specimens of dinosaur poop are fossils. The process of forming fossils is called fossilization.

insect: A type of arthropod that as an adult will have six segmented legs and three body parts: a head, thorax and abdomen. There are hundreds of thousands of insects, which include bees, beetles, flies and moths.

insight: The ability to gain an accurate and deep understanding of a situation just by thinking about it, instead of working out a solution through experimentation.

paleontologist: A scientist who specializes in studying fossils, the remains of ancient organisms.

resin: A sticky, sometimes aromatic substance, often secreted by plants. It may also be the viscous starting ingredient for some plastics that will harden when heated or treated with light.

species: A group of similar organisms capable of producing offspring that can survive and reproduce.

translucent: The property of letting light through, but not being transparent. Usually, things viewed through a translucent material (such as frosted window glass) appear as hazy shapes with no detail.

Triassic Period: A time in the distant geologic past, about 200 million to 250 million years ago. It’s best known as the period during which dinosaurs first emerged.

X-ray: A type of radiation analogous to gamma rays, but having somewhat lower energy.