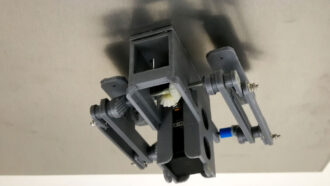 acidic: An adjective for materials that contain acid. These materials often are capable of eating away at some minerals such as carbonate, or preventing their formation in the first place.

alkaline: An adjective that describes a chemical that produces hydroxide ions (OH-) in a solution. These solutions are also referred to as basic — as in the opposite of acidic — and have a pH above 7.

application: A particular use or function of something.

battery: A device that can convert chem ical energy into electrical energy.

catechol: A toxic and colorless crystalline phenol (C6H6O2) that is used in photography, dyeing, and as a chemical to trigger some desired chemical reactions.

chemical: A substance formed from two or more atoms that unite (bond) in a fixed proportion and structure. For example, water is a chemical made when two hydrogen atoms bond to one oxygen atom. Its chemical formula is H2O. Chemical also can be an adjective to describe properties of materials that are the result of various reactions between different compounds.

chemical reaction: A process that involves the rearrangement of the molecules or structure of a substance, as opposed to a change in physical form (as from a solid to a gas).

chemistry: The field of science that deals with the composition, structure and properties of substances and how they interact. Scientists use this knowledge to study unfamiliar substances, to reproduce large quantities of useful substances or to design and create new and useful substances.

conducting: (in physics and engineering) The process or ability of some structure to direct a flow through it of some current (especially an electric current).

current: A fluid — such as of water or air — that moves in a recognizable direction. (in electricity) The flow of electricity or the amount of charge moving through some material over a particular period of time.

electricity: A flow of charge, usually from the movement of negatively charged particles, called electrons.

electrode: A device that conducts electricity and is used to make contact with non-metal part of an electrical circuit, or that contacts something through which an electrical signal moves. (in electronics) Part of a semiconductor device (such as a transistor) that either releases or collects electrons or holes, or that can control their movement.

engineer: A person who uses science to solve problems. As a verb, to engineer means to design a device, material or process that will solve some problem or unmet need. (v.) To perform these tasks, or the name for a person who performs such tasks.

environment: The sum of all of the things that exist around some organism or the process and the condition those things create. Environment may refer to the weather and ecosystem in which some animal lives, or, perhaps, the temperature and humidity (or even the placement of things in the vicinity of an item of interest).

field: (in physics) A region in space where certain physical effects operate, such as magnetism (created by a magnetic field), gravity (by a gravitational field), mass (by a Higgs field) or electricity (by an electrical field).

glue: A sticky substance that attaches one material to another.

hydrogel: A “smart” material that can change its structure in response to its environment, such as the local temperature, pH, salt or water concentration. The material is made from a polymer — a chain made from links of identical units — that have free, water-attracting ends sticking out. So in the presence of water, it may hold (bond) those water molecules for quite a while.

hydrogen: The lightest element in the universe. As a gas, it is colorless, odorless and highly flammable. It’s an integral part of many fuels, fats and chemicals that make up living tissues. It’s made of a single proton (which serves as its nucleus) orbited by a single electron.

hydroxide ion: A molecule (OH–) made from a bound hydrogen and oxygen atom. It has two half-filled covalent bonds, meaning each seeks an electron. This makes the molecule highly chemically reactive.

ion: (adj. ionized) An atom or molecule with an electric charge due to the loss or gain of one or more electrons. An ionized gas, or plasma, is where all of the electrons have been separated from their parent atoms.

link: A connection between two people or things.

mechanical engineer: Someone trained in a research field that uses physics to study motion and the properties of materials to design, build and/or test devices.

metal: Something that conducts electricity well, tends to be shiny (reflective) and is malleable (meaning it can be reshaped with heat and not too much force or pressure).

moisture: Small amounts of water present in the air, as vapor. It can also be present as a liquid, such as water droplets condensed on the inside of a window, or dampness present in clothing or soil.

molecule: An electrically neutral group of atoms that represents the smallest possible amount of a chemical compound. Molecules can be made of single types of atoms or of different types. For example, the oxygen in the air is made of two oxygen atoms (O2), but water is made of two hydrogen atoms and one oxygen atom (H2O).

network: A group of interconnected people or things. (v.) The act of connecting with other people who work in a given area or do similar thing (such as artists, business leaders or medical-support groups), often by going to gatherings where such people would be expected, and then chatting them up. (n. networking)

novel: Something that is clever or unusual and new, as in never seen before.

organic: (in chemistry) An adjective that indicates something is carbon-containing; also a term that relates to the basic chemicals that make up living organisms.

polarity: Having poles (such as Earth’s North and South Poles or a magnet’s positive and negative poles). Such poles exhibit some opposite property or power. The term can also refer to an attractive force toward some object or in some particular direction. (in electricity) The state of being either positively or negatively charged with reference to two poles or to electrification.

polymer: A substance made from long chains of repeating groups of atoms. Manufactured polymers include nylon, polyvinyl chloride (better known as PVC) and many types of plastics. Natural polymers include rubber, silk and cellulose (found in plants and used to make paper, for example).

protein: A compound made from one or more long chains of amino acids. Proteins are an essential part of all living organisms. They form the basis of living cells, muscle and tissues; they also do the work inside of cells. Among the better-known, stand-alone proteins are the hemoglobin (in blood) and the antibodies (also in blood) that attempt to fight infections. Medicines frequently work by latching onto proteins.

robot: A machine that can sense its environment, process information and respond with specific actions. Some robots can act without any human input, while others are guided by a human.

secrete: (noun: secretion) The natural release of some liquid substance — such as hormones, an oil or saliva — often by an organ of the body.

solvent: A material (usually a liquid) used to dissolve some other material into a solution.