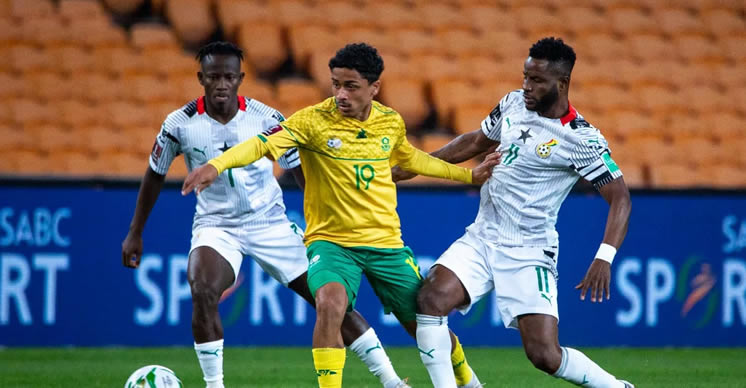 Both South Africa and Liberia scored in the last 10 minutes of the game as the two sides picked identical 1-0 wins in their second matches of the qualifiers for the FIFA World Cup Qatar 2022 on Monday.

At the FNB Stadium in Johannesburg, Bongokuhle Hlongwane scored with seven minutes remaining as the Bafana Bafana beat Ghana’s Black Stars 1-0 to move top of Group G with four points, having picked a point in the 0-0 draw against Zimbabwe on matchday one.

Hlongwane simply adjusted his foot to direct the ball into the net from inside the six-yard box after a cross from the right. It was a bright spark for Bafana and a huge relief to pick a win at home and hand coach Hugo Broos his first victory as the head coach.

It wasn’t a game with so many chances, but the home side will take the victory nonetheless.

They had a chance early in the game when Richard Ofori who plays his club football in South Africa with Orlando Pirates spilled a cross from Teboho Mokoena after an awkward bounce in front of him. The rebound fell on Mothobi Mvala but he couldn’t hit the target on the half volley.

Percy Tau thought he had given Bafana the lead in the 37th minute but his header from a cross that beat keeper Ofori was flagged down for offside.

South Africa had a brilliant chance to break the deadlock in the 46th minute but Evidence Makgopa missed a complete sitter. Ofori who seemed to be struggling with injury let a seemingly harmless ball from Mokoena slip through his legs, but with the goalmouth at his mercy from two yards out, Makgopa connected wide.

South Africa sought to make amends and came close after 66 minutes when Mavala controlled the ball inside the box from Hlongwane’s cross before going for an acrobatic kick, but it hit the side netting.

They kept pushing and were ultimately rewarded with a goal in the 83rd minute.

Meanwhile, Liberia went second in Group C after beating the Central Africa Republic by a solitary goal. Kpah Sherman scored the lone goal for the Liberians with just four minutes left on the clock.